Just returned from a week long endeavor across Utah on saturday (i live in SoCal so it was quite a trek). The Jeep performed excellent off road and drives nice around town, but on the highway i was really disappointed in it.

the specs on the jeep are as follows

around 3" lift
roof top tent
steel bumpers
and in this case, lots of weight in the back (camping gear, spare parts, etc)

picture of the mess:

what i am concerned about is the lack of power. the only time im able to hold over drive is either going down hill, or driving on a level highway with no headwind. Even then just cruising at 70-75mph the pedal is almost floored. going up hill feels much worse, she likes 3rd gear around 65 mph @3100 rpm-ish and she couldnt even hold 3rd gear on some grades. again foot is practically floored. there were a few 2nd gear grades going to Utah, in Utah, and back. 2nd gear behaves about 4,000 rpm @ 60 mph, or something like that. 2nd gear pulls fine but im not sure how much i like having to spin it that high that often, i feel like it should have more power.

for comparison, a buddy of mine who went on this same trip and caravanned with me had no trouble taking is loaded XJ on 31s and stock gears up the same grades in 3rd gear. his XJ is a 97 with a roof rack (more wind resistance) and a really low mileage engine (about 40,000 iirc).

some more information on my engine:
recent compression test shows the following:

from what ive read those arent bad #s. i am curious about the 2 cylinders that were lower.

also, maybe not related, but there was a water incident the jeep had 2 weeks prior to the trip:

i believe to have solved all the issues from that, but maybe its possible i missed something that could be taking away power? driving the truck empty the butt dyno says it feels the same as before the flood :dunno:


OR, am i expecting too much out of the engine? the jeep weighed 4,000 lbs on the scale when i did a scrap metal run, thats including the weight of the tent but no spare tire or anything, so its possible i was pushing 5,000 lbs on this trip. am i wrong to think it should have more power? am i over looking something that could be robbing major horsepower?

the sluggishness really made highway driving annoying. I'm looking at my 5.9 ZJ and getting ideas :rtm: im getting tired of messing with the MJ, but i'd hate to retire its off road duties since i really enjoy wheeling it. I mostly do Overland type off roading so lots of highway driving is typical for a trip, hence why the ZJ is tempting to use

NAXJA Member
Yea for 33s I think 4.56s are a better match. I may be remembering wrong but I think 33s and 4.56 puts your final drive ratio just a hair lower than stock. So with 4.10s you are really putting g the motor and trans at a disadvantage.

You've added quite a bit of weight to that thing, so I wouldn't expect a powerhouse.

I'd go with 4.56s and report back. If you're still craving more power, you're going to need to look at either a stroker or engine swap.

I drove a stock XJ the other day...man I forgot what it was like to push on the throttle and feel it just pull. XJs have great power when stock.... put all the crap on, lift, tires, bumpers it just bogs them down.

I read all the threads on more power... I have yet to find one that says I added this or that and dyno shows X amount of increase. Skeptical of anything JP Mag says. I want to put add-ons for more power but don't want to waste my money.

I'm thinking that doing 63mm TB, and new exhaust is probably most bang for the buck...but not even sure on that.

NAXJA Member
I agree on going with different gears but the water could have caused other problems.

Do a full wet/dry compression test.

dont forget that the altitude is working against you too.
9

yes you are asking too much.... It's simple compromises.. you can either build your rig for off-road capability or for street ability.. Rarely do the 2 meet. In your case you would probably get the most bang for the buck, running 2 sets of tires. Toss a set of 30-31's under there for the street you'll have a rocket.
Y

I'm thinking that doing 63mm TB, and new exhaust is probably most bang for the buck...but not even sure on that.
Click to expand...

I drive in the mountains a lot. I know my 4.0L is healthy and its got 4 hole injectors and headers, but with 4.56 gears and 33s I cant get up very many mountain roads at any speed over 55. I end up spinning close to 4500 RPM pretty frequently and for an engine with 150k miles and a 5200 RPM cut, thats pretty sketchy to me. Ive tried a bunch of different things but honestly, the only solution is to stroke it or upgrade to a better engine. The 4.0L is a great engine in terms of longevity, but its not very good when it comes to power and efficiency. You can try a bored out TB, exhaust, etc but youre just going to end up at the same point again. Might be time to look into a 5.3
J

Meant to type 62mm... but you made my point.... some say bigger TB is awesome.... but where are the numbers? Show me a dyno that says adding X gives this much HP.... I should have stroked the motor when it was rebuilt...

NAXJA Member
thats a lot of weight. I was at 4.88s and 33s/auto and it was about right in the hills(with like 2000 pounds less then versus now) . Since then I've added 5.13s/36s/tons more weight and its a dog in the hills with 4 guys and all the tools parts and gear. pacesetter header, bored TB, modded CPS and MAT sensors, tuneup every 6 months.

if you dunked it:
make sure TPS doesn't have a dead spot and that its adjusted right. or that its not dead altogether
make sure all wiring is all cleaned up good
alternator going out?

dizzy is good and not a tooth off? timing is good?

Looks like the consensus is definitely that my engine is being normal. I guess thats good, although a little disappointing because i dont like going slow :rof: good to know im not the only one crawling over grades at 4,000+ rpms

i guess now that i think about it, 5,000 lbs and a parachute of a tent strapped to the back is not a good recipe for speed on a vehicle with sub 200 hp, 33s, and inadequate gearing. :gee:


blondejoncherokee said:
if you dunked it:
make sure TPS doesn't have a dead spot and that its adjusted right. or that its not dead altogether
make sure all wiring is all cleaned up good
alternator going out?

dizzy is good and not a tooth off? timing is good?
Click to expand...

i have checked or replaced just about everything mentioned.

guess that leaves me a few options

NAXJA Member
I think you'd find yourself happy with 4.88's.

You don't think those compression numbers are a little low? I haven't done a test on a stock 4.0 in a long time, but I'd expect closer to 175 or so?

i originally thought so too. some quick googling shows otherwise. 120-150 is supposedly normal

I had no idea factory was so low.

i took my XJ cross country, almost the same setup as your MJ... 3" lift, 33x10.5s, lots of weight, etc. i had every bolt on... cowl intake, 62mm TB, 99 intake, header, hi flow cat, dynomax muffler, had almost 200k miles on it when i got home. only when i was up in the mountains in colorado did i want more power. i think you'd benefit from a shift kit in the aw4 to firm up shifts and loose some slush going from gear to gear.

pic bc i love this shot.. 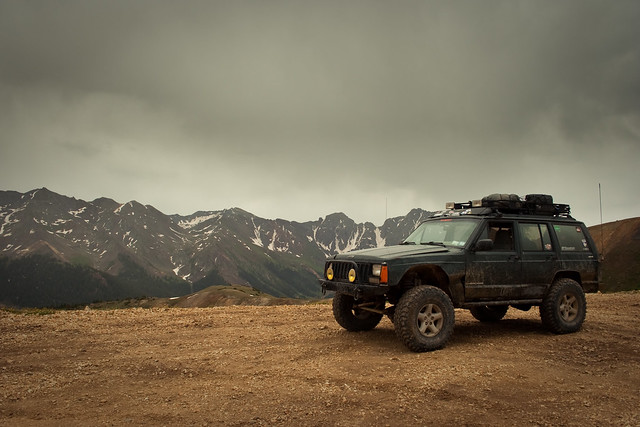 NAXJA Member
Speaking as one who is relatively ignorant about this straight six, but has several decades of experience playing with big block Chevys, is there not an option for some head work and a cam?

I ask because my understanding is that one of the strong suits of this straight six is the solid bottom end. That, and I have gotten very pleasant results out of custom head work and a well matched cam on originally smog burdened BBC blocks. Remove the restrictions in the middle of the picture and then things like a throttle body and exhaust start to make a difference.

I am in the same boat as the OP, and yes, gears are on the short list, but I have a strong suspicion I am still going to be disappointed, particularly given my affinity for torque monsters. I know I'm not going to get the same results as a rat motor, but isn't there an option for getting more air through the head?

Hoooper said:
4.56 gears and 33s I cant get up very many mountain roads at any speed over 55. I end up spinning close to 4500 RPM pretty frequently and for an engine with 150k miles and a 5200 RPM cut, thats pretty sketchy to me.
Click to expand...

Doesn't sound sketchy at all, sound about right for it, remember this vehicle came with 28" tires and 3.55 gears.. Hell you got it better that your higher speed at 4500rpm than the stock does
This is where it's Rpms and speed is for the factory size