NAXJA Member
4x4JeePmaNthINg I have a 4.0 and an existing aluminum radiator so I don't have any plans to swap out to a different radiator. I might go with a new one when I do a 4.7 swap, but for now it works well. With my fittings I simply cut the steel lines from the cooler that run in and out of the radiator, and used rubber hose and clamps to and from my two coolers. I simply capped off the in and out tranny cooler lines that go into the radiator. Might not be as clean looking as using AN fittings, but was easy and cheap to do, and works.

I have run Magnafine filters on all my vehicles' automatic transmissions and power steering return lines for years without issues.
They are often recommenced to be installed when a new transmission is installed, to catch any debris lodged in the cooler.
The filter has a large, low restriction paper element plus a magnet to remove any ferrous metals.
R

Jim Malcolm said:
This is a touchy subject. No transmission routes all of the oil through the cooler; the hoses just aren't big enough without significant backpressure. An orifice is used to proportion off some of the fluid to flow into the cooler circuit. By adding a filter, you're increasing the backpressure, thereby reducing the percentage of flow that goes through the cooler circuit. The orifice size can be changed to account for this when rebuilding, but it's not something you're going to want to tackle just for the heck of it. Personally this is one of those things that I thought long and hard about and decided that the downsides outweighed any upside. Magnetic drain plug and regular drain-and-fills are my $0.02.
Click to expand...

Jim, you raise a good point. I too have been concerned about cooler circuit flow restriction. That's why I've been putting off my Magnefine installation.

What exactly is the downside? Is it only the reduced fluid cooling, or does it do something else? What about using a Magnefine versus a Spin-on type filter?
J

Let's first start with the upsides. For an in-service transmission, there is none in my opinion. If one was needed, the Engineers would have put one in. Just look to cases where they did (Honda & Subaru) and it's nothing but problems. There just isn't a need to filter transmission fluid to that degree.

Besides the reduction in flow, you've just added two more connections and another component that could potentially fail. Most of the inline style are plastic and glued together. Not something I trust on a vehicle that I rely on heavily to not breakdown. Me and Murphy don't have the best relationship as it is so I try to avoid things that could fail at the least opportune time. There's plenty of reading out there on issues with these filters if you choose to look. So combined (going to run hotter + increased risk of failure), the downsides outweigh the upsides (there is none) for my XJs with 220k+ each on the AW4. It's the AW4, don't mess with what isn't broke.
J

Spin on filters IMO are worse than the Magnefine style. They are a much large change in area, leading to more backpressure, plus more restriction through the filter media (don't have any data on this). Not really issues if properly designed for. Subaru uses a spin on trans-only filter and it's easily accessible, so they don't have too many problems with it. Honda builds it into the transmission and doesn't even list it as existing on earlier models. I was leaning towards a spin-on, but I found a post on some Bob the Oil Guy where someone with an AW4 posted that it ran hotter afterwards. I'm sold. The AW4, and most other transmissions, simply weren't designed to have significant back pressure on the cooler circuit.

I moved mine all to AN fittings...far better than the OEM crap: 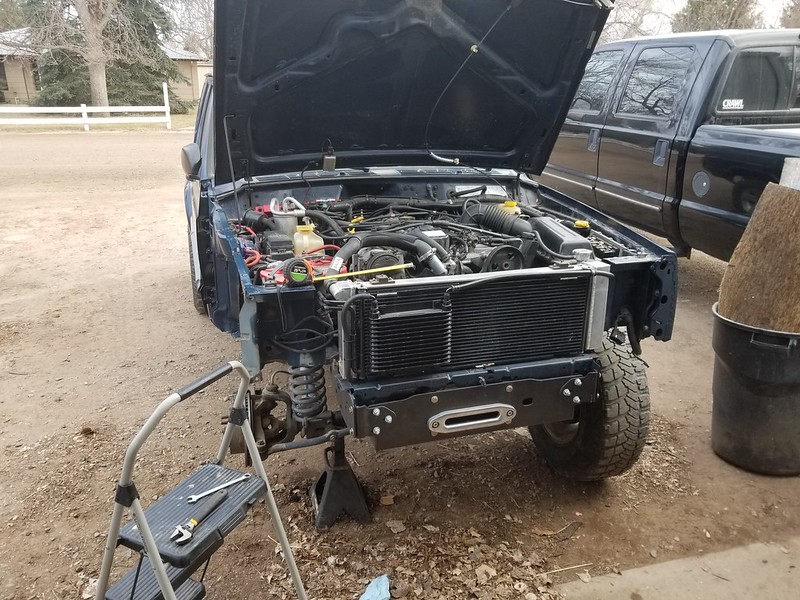 freerider15 said:
I moved mine all to AN fittings...far better than the OEM crap:

Better fix that mounting, that's a "no-no".
B

4x4JeePmaNthINg said:
Btw black1990jeep, how often do you change this other filter and how does it effect flow? Stock aw4 is a screen vs filter so I'm curious .
Click to expand...

I recently installed it for first time. Ill likely change it with the regular fluid change interval. I will also cut it open to examine it. I have done that to many an engine oil filter.

As for back pressure, I dont know. My external cooler does get hot, so there is flow thru it. The maker states it is ok for transmissions and the required flow needs...


I also use the magnafine filter on my power steering fluid along with a cooler.
B

I probably should do this.
B

More info on the Magnafine...

The Cherokee flow rate per the test procedure link given in my other post is 0.75 gpm ( 1 qt per 20 sec.)
Thus the Magnafine has over nine times the flow capability needed for the Cherokee.

all is good flow wise.

Whatever, it's your trans!

RCP Phx said:
Whatever, it's your trans!
Click to expand...

Please explain to the class how you view it as wrong...
B

NAXJA Member
If the T-Cooler is not touching the radiator, it looks good to me! I know some people - prob RCP Phx, believe you should never support a secondary cooler with the radiator fins, and metal tabs should come down from the core support to mount a Trannny Cooler. I have seen them mounted both ways, with no problems. Of course you just have to make sure everything clears when you put the front end back on, but I don't see a problem.
R

All of what Baja said, unless your building a mall-crawler you need some solid mounts. I've seen those plastic ties broken many times.

We have our own version of the "Hammers" here and it tears things up!

RCP Phx said:
All of what Baja said, unless your building a mall-crawler you need some solid mounts. I've seen those plastic ties broken many times.

We have our own version of the "Hammers" here and it tears things up!

Meh, I've known many many people who've done the same l, without issue. They're not physically touching, and this is a rig I'll be overly beating on by any means. The main reason I got thr trans cooler is for mountain passes, not rock crawling. As long as the mount is secured well, and has not wiggle room, it will be fine.

The trans cooler is one of the areas I made sure to not go head on overthinking it.

Is solid mount better? Sure. Is the mounting style I went with fine? Yes.

This is *not* a rig I'll be beating on by any means.

I've got the buggy for that kind of stuff...the trans cooler I threw in that makes the one I installed on the small XJ look laughable.
B

For the larger coolers, maybe additional zip tie like holders be used, say eight rather than four. Buy two holder kits as they I noted come in four packs.
4

bajabronco said:
In my rig I bypassed the cooler in the radiator, and am running two separate tranny coolers (overkill!) . I have a heavy girl on 37's, steel bumpers and a hybrid cage. The tranny use to heat up on the long climbs in the mountains. Separating the engine cooling from the tranny cooling allowed me to isolate each system and deal with them separately. Now both systems run really well -


Is one tranny cooler sufficient when separating the two cooling systems?

Is one tranny cooler sufficient when separating the two cooling systems?

Did you mount both in front of the radiator and does that effect engibe cooling?

I will share my experience in this venture.
About a year ago, my water pump started seeping and I had wanted to add a trans cooler eventually anyway. Much searching here on the forums and I gathered parts galore. New water pump (gates) t-stat, belt, hoses, ZJ fan clutch, flush cooling system and heater core, etc.
Bought all new hard lines, then adapters to add a temp gauge with the sending unit right at the outlet via AN fittings. I had a local hose shop weld some AN adapters to the hard lines and add an AN adapter to a new stock style radiator. Got one of the Hayden coolers and mounted it in front of the radiator/condenser on the right side. I was using some aluminum tubing from Summit and purchased the 37 degree flair tool to make some of my own hard lines with AN ends too. I also added an in line filter, just a generic filter head that takes the same spin ons as the motor.
Routed the lines as follows: out of trans over the temp sender to the filter, to the cooler, to the stock cooler in the rad, and back home to the trans. After all of that horseshit, it ran hotter than before as far as engine temps but no overheating except for long idles. I had no previous bearing for trans temps but it seemed to match the engine in the city and cool way down on the highway.
This was "fall" in AZ. It did fine over the "winter" and the whole 2 weeks of spring. Then came the heat of summer and I was not comfortable with it anymore. I had developed some leaks in my homemade hard lines AN connections and It affected my A/C ever so slightly.
I planned another 3 day wrench session and got an aluminum radiator this time. I am a little over 200k now so I knew I should have done the timing chain last time but skipped it. New timing chain this time. I also occasionally got trans codes and a CEL and on 2 occasions it didn't go into overdrive on the highway. Shutting of and re starting solved it both times. I knew it was in need of a real good trans service (didn't do it when I added the cooler) so I got a filter,gasket and solenoid kit and stocked up on synthetic atf. I ordered a hose kit from Amazon for make your own stainless braided lines and replaced everything I did before. Moved the cooler down to the cross member and added some breather holes in the bumper. I also added a thermostatic switch in one of the extra holes on the filter housing for a future designated trans cooler fan.
Now everything runs cooler. The trans will still match the motor temps when it gets to the higher end (stop and go city or pulling trailer on a grade or wheeling) but for the mostly it stays a little cooler except for highway when its a lot cooler.
I know that there are other issues that I could address (gears) that would help. If I could lock the converter in second when pulling grades with the trailer (I over-pack, I know) I would like that too, but that's a whole different can of worms. I am gathering parts for another relay block to run accessories including the trans cooler fan and wouldn't you know, there might be a place in there for the right hand drive electric fan conversion. My radiator has a port for that t-switch as well.
I have noticed no ill effects from the spin on filter. I change it when I change the engine oil, top off the loss and that's it.